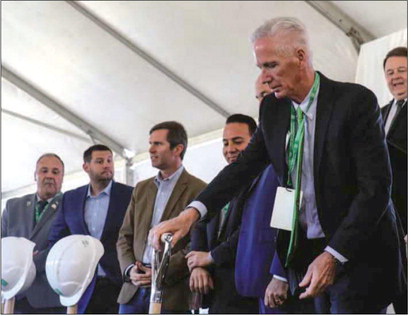 CANNONSBURG Dressed in their Sunday finest, the gentry and the political class of Boyd and beyond gathered to celebrate the groundbreaking of the first quarter horse racing track in Kentucky on Friday.

It was a true who’s who of northeastern Kentucky — bankers and lawyers and doctors and politicians and developers and business owners and union reps donned suits and dresses, hobnobbing as they awaited the governor’s arrival.

There were visitors, too — folks from as far as California and Miami, from New York and the Eastern Band of the Cherokee Indians.

But it just wasn’t the candidates and the bourgeoise, the children were there, too — youths from Boyd County High School

marching band and the vocational school. Over in the distance, a helicopter chopped across the sky, circling around and around the field until finally landing in an empty space. Out came Gov. Andy Beshear and righthand man Rocky Adkins, his Senior Adviser, ready to ring in a new day in Boyd County.

The land itself is a huge tract — almost 200 acres, just beyond the wood line of the East Fork. Largely flat, too — more than one official said offhand that if it weren’t for how flat the tract was, the track probably never would’ve landed in Boyd. Remember — the track needs to be only 660 yards long — just a small parcel on the land.

How did we get here?

For those living under a rock, the news about a horse racing track had been a long time coming in Boyd County, ever since the fiscal court publicly announced it would start negotiations with Revolutionary Racing Kentucky about leasing out the Sears building in the spring.

That lease would ultimately pave the way for an application for the final horse racing license in Kentucky, which Revolutionary Racing secured in July.

At Friday’s event, WSAZ’s Rob Johnson played the master of ceremonies, introducing the list of men and women who made the $55 million deal possible. He said news of the development was met with skepticism in his industry.

“We have a lot of skepticism in the news business, so we were skeptical when some guy from Florida name Jason said he was going to build this thing called Camp Landing,” Johnson said. “Then we heard about this race track and we were skeptical about that. But

look now, down the stretch they come.”

While everyone paid their respects to Adkins (who Johnson called the Governor of Eastern Kentucky) and Beshear for their support of the project, the real man of the hour was Larry Lucas, chair of the organization.

Lucas was an experienced gaming developer, working in Virginia to legalize historical horse racing machines (essentially a regulatory workaround for slot machines) so the company could reopen the Colonial Downs.

That track just sold to Churchill Downs for a couple billion bucks.

“I want to thank everyone here who made this possible, who pushed this through and showed their grit and hard work to make this happen,” Lucas said.

Beshear called the groundbreaking a “great day for Boyd County” and Kentucky. He said the track is just part of more economic development he intends to see brought to Boyd County.

“I want to see about getting a battery supplier here, I want to use that land we’re getting back from the Braidy deal and work hard to use it for good-paying jobs,” he said. “We’re going to have back-toback growth in this state that will change generations.”

Adkins said the track was a result of bipartisan cooperation, calling Friday’s event a “Team Kentucky Day.” “When we tear down all city lines, all county lines and work together, we get things like this,” he said. “This was not a red or blue issue, a left or right issue, this was non-partisan. This is what happens when we work together.”

Sen. Robin Webb, a self-described “horse girl,” said the track will include a horse show space as well, which will benefit the youths of the area.

“I know many life lessons were given to me as a result of my relationship with equines,” Webb said. “I just want to thank Mr. Lucas for dedicating a space here for that activity.”

State Rep. Scott Sharp, said he was proud to be a part of bringing the track here and was open to doing anything whatever he could to work with the governor — who in other realms he is highly critical of — in bringing economic development to Boyd and Lawrence counties.

All the buzz and the hoopla wouldn’t amount to much if there wasn’t money to be had — Boyd County Judge-Executive Eric Chaney, a huge proponent on economic development, said tourism dollars increased by a third over the last couple of years in Boyd County.

He said with the growth at Camp Landing and the building of the track, it won’t be long until the county is ranked “well in the top 10 for tourism dollars.”

“Boyd County will no longer be a pass-through area, it will be a destination,” Chaney said.

And helping making that a destination is the Eastern Band of the Cherokee Indians, who over the last 25 years have turned their reservation into a tourist destination thanks in part to gambling.

Chief Richard Sneed, who represented his people at the event, said the tribe started to take the monies generated on the reservations and investing it into ventures outside North Carolina after the U.S. Supreme Court overturned prohibitions regarding sports betting.

“With the exception of Utah, gambling will probably be in every state within the next 20 years,” he said. “Sports betting is the first step in other forms of gambling.”

Last year, the tribe bought a casino in Indiana — Sneed said investing in the Kentucky track is just part of that investment strategy for the tribe.

John L. Holbrook, of Tri-State Building and Construction Trades Council, said between the renovation of the Sears building, all the grading that would need to be done for the track and the construction of the equestrian center and the grandstands, every trade will be represented on the job site.

“It’s going to be pretty busy, and it’s good to have it so close to home,” he said. “Right now, we’re having to send guys to Columbus or elsewhere to work jobs. The more we can build here, the better.”