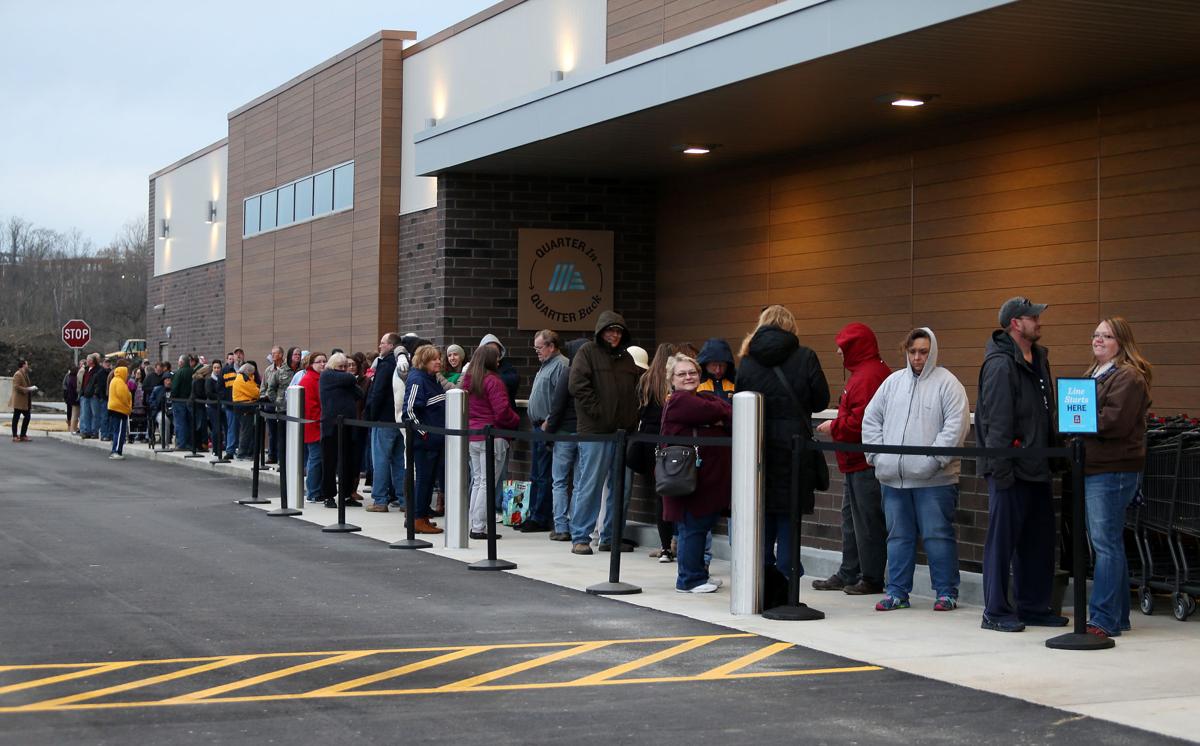 Elisha Bevins, of Ona, was first in line at the new Aldi store, which scheduled its ribbon cutting and grand opening for 8:30 a.m. Thursday.

Bevins said she is a loyal Aldi shopper but has had to drive to Huntington or Teays Valley, West Virginia.

“This new location is very close to my home,” she said. “I think the produce here is amazing.”

Tanyard Station is being built on the site of the historic CSX railroad yard along the Mud River and Tanyard Branch Creek in Barboursville. The projected cost has been estimated at $100 million, with $9 million of that total being for the road and traffic upgrades.

“It’s taken a while for us to get to this point, but we are super-excited that businesses are opening and seeing the large turnout of shoppers that appear as excited as we are,” said J. Michael Nidiffer, with the development company Interstate Realty.

Barboursville Mayor Chris Tatum also expressed his satisfaction with the new development. It will be an economic boost to the region, bringing additional jobs and commerce to the Interstate 64 corridor in Cabell County and Barboursville, he said.

“This new retail development and the new businesses here help to improve the quality of life for our community,” Tatum said. “This development adds to Barboursville being the premier shopping destination in the region.”

Once completed, Tanyard Station will be one of the larger retail developments in Cabell County, totaling over 200,000 square feet of space.

The Cabell County Commission helped lay the groundwork for the new center by authorizing as much as $9 million in tax increment revenue bonds for infrastructure improvements associated with the Tanyard project. The bonds will be repaid solely from increased property taxes on that property, county officials say.

The opening of the Aldi meant that the first 100 customers received gift cards and a complimentary eco-friendly shopping bag, said Graham Fowler, a district manager for Aldi.

“Shoppers can also sample Aldi-exclusive brand foods and enter a sweepstakes for a chance to win a year’s supply of Aldi produce,” he said. “Aldi offers a wide variety of fresh fruits and vegetables, including more than 100 produce items.”

Fowler said the new Aldi is the chain’s largest store to date and is part of a $34 billion Aldi investment to expand to 2,500 stores nationwide by the end of 2022. Aldi currently has more than 1,800 stores in 35 states and serves more than 40 million customers each month, he added.

“This store model is approximately 16,000 square feet on the sales floor, and the entire building with back space is around 20,000 square feet,” he said. “It allows for a lot more produce, products and refrigerated items at this larger location.”

Jacklynne Via, the store’s manager, said the store opened with 15 new employees and is open from 9 a.m. to 9 p.m. Monday through Friday and from 9 a.m. to 8 p.m. Saturday and Sunday.

“We also were awarding multiple prizes, including the giveaway of a $1,000 Sheetz gift card,” she said.

Some customers brought in nonperishable food items for donation to Facing Hunger Foodbank in Huntington. Sheetz donated $2,500 to the organization, which provides hunger relief to more than 265,000 people in the region struggling to access nutritious and adequate amounts of food. Sheetz also donated $2,500 to Special Olympics of West Virginia.

“We have many patients ready to see our dentist, Dr. Joel Cost, today,” she said. “We know there is a need in this area and have already had lots of interest in this new location. We recently opened a Charleston location as well and have over 700 locations nationwide.”

Cost, the practice owner and managing clinic director, has been practicing for 12 years and also owns Aspen Dental’s locations in Ashland and Charleston. The new location has 14 employees, Cost said.

“We are a full comprehensive dental office,” he said. “We offer everything from cleanings and periodontal treatments to extractions, dental surgeries, dentures, implants and more, including restorative dentistry services like fillings, crowns, bridges and root canals. We also offer orthodontic procedures. We also have our own lab at this location. We offer free new patient exams and X-rays.”

“We plan to expand those hours of operation in the near future,” Cost added.

Verizon Wireless had a soft opening at 10 a.m. Thursday, according to officials at the store.

Longhorn Steakhouse is scheduled to open Jan. 22. Other businesses scheduled to open soon at the development are Hwy 55 Burgers Shakes and Fries, Sport Clips and Zen Nails & Spa, but those businesses have yet to release opening dates. Menards will begin construction in the spring, Nidiffer said.