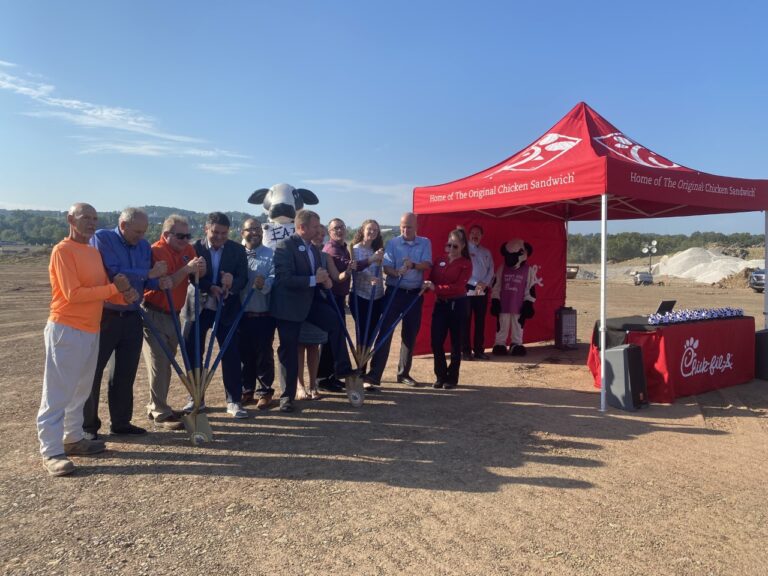 SOUTH CHARLESTON, W.Va. — Chicken and waffle fries will soon be served at a new Chick-fil-A location in Kanawha County.

A groundbreaking ceremony was held Monday morning for the fast food restaurant at the new Park Place Plaza along MacCorkle Avenue.

Chick-fil-A will be the first tenant at Park Place when the doors open at the end of January 2023. The plaza is located across the street from the Riverwalk Plaza.

“This has been a long time coming just to get this thing started. This is one of many tenants. Hopefully we’ll be doing this on a regular basis soon,” Mullens said.

Plans for the new shopping center started in 2016. Mullens said it’s only fitting that Chick-fil-A moves in first, given its popularity at the nearby Southridge location.

“Not only are they a good business, good product, good service, but they do so much for the community, so that’s what I really like about Chick-fil-A other than the obvious. That’s what makes it pretty special,” Mullens said.

Tom Minturn, owner and operator of the Southridge and Park Place Chick-fil-A sites, said they’ll be able to serve more guests at the new location.

“It’s very similar to the one at Southridge except it’s going to have a larger lot and a lot bigger drive thru,” he said. “It’ll allow us to double our influence and double our impact in our communities.”

“Most of those are full time with benefits, 401k, insurance, so we do everything we can to provide a great situation,” he said.

A planned anchor store at Park Place, Menards, is expected to break ground in the coming months. The plaza will feature a mix of big box stores, outlets and about 6-8 restaurants total.

Construction on the entire project is expected to be complete in August 2025.