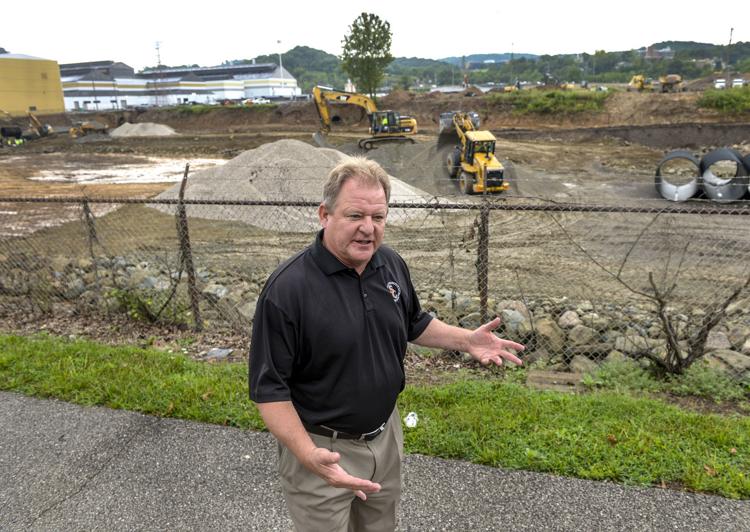 The real estate sign has been there for years. At first, it sat beside what looked like a swamp, prompting a motorist to think of the old “Hey, if you believe that, I’ve got 40 acres of swampland I’ll sell you.”

It’s never been a joke, South Charleston Mayor Frank Mullens said, or even worse, a scam. The sign in question stands before South Charleston’s long-awaited Park Place shopping center, a project rife with a long timeline, extreme construction maneuvers and ordinary questions as to how a retail center makes it in internet-shopping-crazy 2021.

Mullens said his city’s planned retail center is a serious commercial venture and will work, because of a busy location and its layout as an outdoor space with free parking. The development will feature outdoor storefront entrances linked together village style, Mullens said, as opposed to an enclosed mall with a parking garage, a la Charleston’s Town Center mall.

“If you do your homework, you’ll find that those kinds of developments are thriving,” Mullens said. Reminded of the vibe given off by Huntington’s Pullman Square — with its open but cozy plan — Mullens said, “Yeah, that’s what I hope we end up with.”

Park Place’s official groundbreaking occurred in February 2019, but the sign had been erected before then.

J.F. Allen workers on Monday were busy filling with 900,000 cubic yards of dirt a nearby fire retention pond formerly used by chemical giant FMC. FMC sold the land to developer Ray Park. They city bought it from Park for $6.5 million, hence the development’s name. Park also is the owner of the South Charleston Industrial Park.

Mullens said a developer from Bristol, Tennessee, first showed interest in the property during his first term as mayor, from 2007 to 2011. The developer worked for INTERSTATE Development, the company that eventually will flesh out the finished mall.

“[A developer] just loved the fly ash pond,” Mullens said. The developer thought the location could not be beaten. Mullens said it is one of the top five most-trafficked areas of the state.

The city agreed to handle site preparation, which involves a lot of heavy lifting, then later sell it to INTERSTATE. The remediation task has indeed been hefty, involving the fly ash pond and the fire retention pond. The latter served as an emergency reservoir, in case FMC caught on fire, which Mullens recalls its chlorine plant doing at least once. The old FMC footprint, the industrial park and the mall site occupy a cluster of adjacent parcels.

Workers hauled dirt Monday from South Charleston Technology Park. The city is paying J.F. Allen $13 million to move dirt from the Tech Park hillside and fill the fire pond. Clear-cut trees can be seen on the Tech Park hill, directly across from the site.

The fly ash pond received leachate, or waste products, from FMC. Known as the wet method, it consists of allowing the water to drain and evaporate from the ash. Environmentalists fear an excess of heavy metals beyond U.S. standards.

Mullens, however, said two parties have paid for fly ash pond testing, once by THF Realty and once by the city. The mayor vows the soil is clean. While the drained fire retention pond still had work to go, the fly ash pond looked dry and loaded — with an underlying layer of dirt and 200,000 cubic square yards of rock. Straw-like drains have gathered the squeezed-to-the-top water and taken it away.

In all, the city is paying $24 million in site remediation, to be funded by tax increment financing. A TIF, as it is known, dedicates sales tax from a prescribed district to offset costs of a major economic project in the district, one no ordinary private entity would have any incentive to do.

“Now we’re going to have enough dirt to fill this space, and the Tech Center will have a 14-acre, ready-to-go pad for expansion,” Mullens said. “It’s a classic win-win.”

Originally, the West Virginia Division of Highways had agreed to partner with Park Place, until it discovered there were only 400,000 cubic yards to spare from a high-profile Jefferson Road project, not 900,000, and the road project had been pushed back. A second TIF project is to pay for site development at the Tech Park; a sewer line to the corridor; and the road project.

“I want to stress that these TIFs are not new taxes,” he says. “That is very important to know.”

Both sales and property taxes in the district will be at the same rate they were, Mullens says, just specifically steered in a certain direction.

“We knew we were going into a lengthy process,” Mullens said. “But really, it’s been pretty much on time.”

He said COVID-19 has not proven a substantial obstacle.

Mullens said plans to construct three entrances to the new development will be completed, one to directly align it with Riverwalk Mall, across from MacCorkle.

It’s impossible to keep the buoyant Mullens down. He is bullish on Park Place and bristles at the naysayers who say retail is dead. He is not discouraged by a rebuke from Costco, the national big-box retailer.

“They said they had no intent to do business in West Virginia. They don’t like the demographics,” Mullens said.

On the other hand, he loves the idea of an announced Chick-Fil-A.

“What these national folks don’t realize is that, when people here drive 45 miles, it’s a long way and can draw in a lot of people. People will drive to get to this place,” he said.