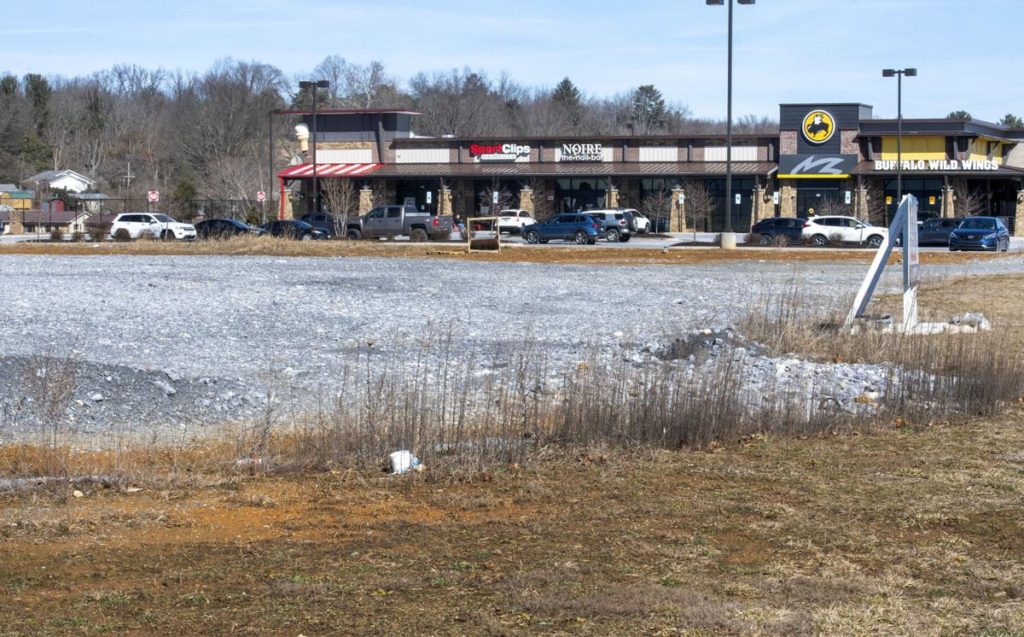 IDA transfers land for Texas Roadhouse at The Falls

BRISTOL, Va. — A new Texas Roadhouse is one step closer to locating at one of the most visible sites at The Falls in Bristol, Virginia.

On Monday, the Bristol Virginia Industrial Development Authority board unanimously approved transferring a 2.06-acre hilltop parcel overlooking the center’s main Lee Highway entrance to Nehemiah LLC. That company is owned by the owners of INTERSTATE Development Partners of Bristol, Tennessee — the city’s primary project developer — and will serve as landlord for the planned Texas Roadhouse restaurant.

Construction is expected to begin this summer, according to Michael Hamlin, INTERSTATE’s general counsel.

“We’ll potentially close on this in March. We would start our work in about 30 to 45 days. We’ve got about a 90-day period for land work, and I would think Texas Roadhouse would be, middle of summer, you would see some construction started on their restaurant,” Hamlin told the authority board.

Texas Roadhouse Holdings LLC, a Louisville, Kentucky-based corporation, is expected to build and operate a new restaurant on the site. The company currently has locations in Johnson City and Kingsport.

A Calhoun’s restaurant was originally planned for that site, but the Knoxville-based chain’s parent firm Copper Cellar opted out of agreements to build a Calhoun’s and a Smoky Mountain Brewery in 2016, after a series of delays impacted the center near INTERSTATE 81’s Exit 5.

Board Chairman Paul Conco asked if the deed allowed for the land to revert back to the IDA if — for some unknown reason — Texas Roadhouse failed to open or opened but then closed abruptly.

“We’re going to have over $800,000 in site work improvements. We’ll have a construction lender. We will do our work in advance. We wouldn’t do that if we didn’t believe Texas Roadhouse was going to come in and build,” Hamlin said. “I don’t think the lender — unless they had someone who was going to pay that back to them — is going to allow the property to revert back to the city or the IDA.”

This was the same process INTERSTATE used in securing an ALDI grocery store for The Falls in 2017, Hamlin said.

The Falls suffered other losses since opening in late 2015, with the 2020 closings of co-anchor Cabela’s and a Freddy’s Steakburgers. In addition, developers of a planned Tru by Hilton hotel failed to secure sufficient funding to proceed.

Conco said it is unfortunate the city doesn’t have “any guarantees” regarding tenants.

INTERSTATE is negotiating with Buffalo Wild Wings on a shared-use agreement so that, if the parking lot of either business is full, customers can park in the adjoining lot, Hamlin said. He is “hopeful” that will be completed this spring.

The IDA also approved deed restrictions sought by Texas Roadhouse to keep direct competitors from building on five specific parcels within the center. Those include vacant sites just across Falls Boulevard, a parcel between the new Firestone store and Buffalo Wild Wings, a site overlooking I-81 next to Cabela’s, land adjacent to Lowe’s on Cabela Drive and the corner lot opposite from ALDI, next to the traffic circle.

Restrictions wouldn’t apply to land near the new Planet Fitness or Hobby Lobby.

The proposed restrictions and a separate agreement to add Texas Roadhouse signs must also be approved by the City Council, which meets at 6 tonight at City Hall.